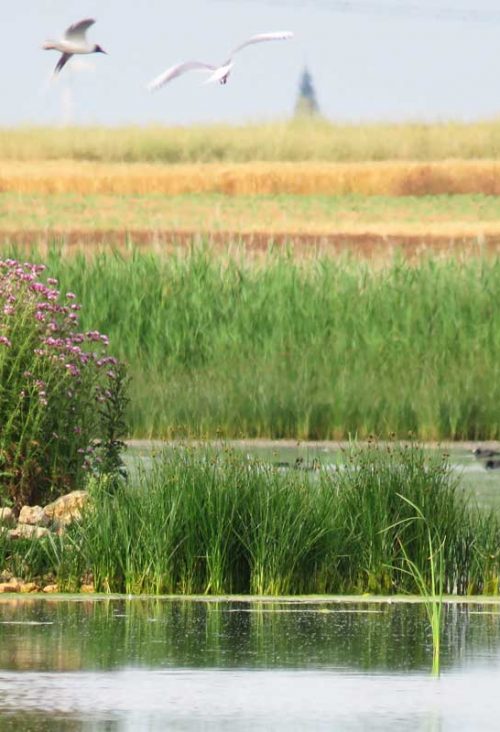 In the wetlands where we work, censuses of aquatic birds are conducted. We study the wetlands bird’s population and the autumn migration of small waterbirds in their migratory routes. There are volunteers who participate in some scientific banding actions learning from first-hand the conservation work. The banding of migratory birds allows to obtain information about migration phenology, the abundance, the biometrics, and the physical condition along with the origin places, and the migration destination of birds. With this information, the necessary knowledge is increased to define the migratory strategies of birds. The aquatic warbler (Acrocephalus paludicola) is the passerine bird most endangered of Europe. Its banding has allowed to learn the journey of this particular specie in places such as a wetland near the Baltic Sea, areas in the south of Lithuania, and other Spanish areas from Leon or Burgos which confirm the importance of Iberian wetlands from the north plateau.

Besides birds, the presence of other species are good indicators of the wetlands’ health. It is the case of fairy shrimps name given to Anostraca species that live in temporary aquatic environments, vernal pools, both fresh and salt water, which form after rainfall and dry out completely during the summer season. In the Iberian peninsula, numerous studies agree on the need to make an effort to conserve Anostraca as flagship species for the conservation of these vernal pools. They are crustaceans, but do not have shells and their origin dates back to the Jurassic period. With this objective and in collaboration with the National Museum of Natural Sciences, we carry out research work to determine the best management and conservation practices for these environments and their species.

Occasionally, works consist of fighting against alien invasive species. For this, the help of volunteers is really helpful such as in the case of the developed works from Espai Natura de Torreblanca where we work to conserve the European Pond turtle (Emys orbicularis). Each campaign includes an initial training phase in which the volunteers learn about the conservation problem, they are taught how to identify species; bait traps are built or repaired, and later on they are placed in the natural environment and working groups are organised for subsequent monitoring and control.