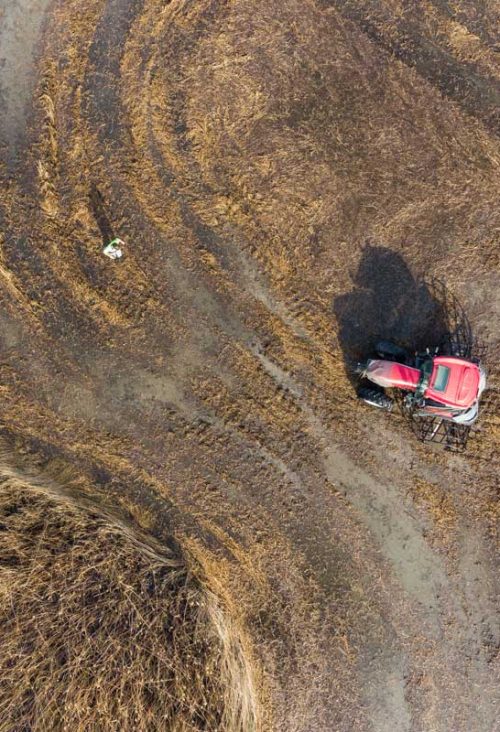 In some wetlands such as those of Tierra de Campos a stripping process is done in order to remove organic matter and dead vegetation from the first soil centimetres of the wetland basin. Its excessive accumulation throughout decades along with the abandonment of practises such as grazing within those areas (during dry season) brings a water eutrophication when they are flooded. Therefore, during summer and autumn seasons, coinciding with the absence of rain and with the consequent wetlands’ dryness, that superficial layer of organic matter is removed. Through these works, plants’ rhizomes are eliminated, slowing down their recolonization.

In other wetlands such as Valencian coastal ones, actions are focused on the improving the hydro management through gates’ lifting, water manholes’ building, drainage channels’ cleaning and the improvement of water entry. It also includes the regular management of floodgates for the maintenance of the ideal hydro levels and for the improvement of the habitat conditions. These actions allow the exchange of water between the wetland and the sea, and the entry of species such as eels. The fangueos (mud driving) are realised with the aim of churning the slightly flooded surface with an iron-wheeled tractor the surface slightly inundated in order to oxygen the soil and to incorporate the rest of the mowing to the soils. These mud driving help to open up clearings and the rise of water from the groundwater table, creating sheets of water free of vegetation. They are also used to decompact soil that has been cultivated for years, as the wheels break up the surface layer, thus aerating and oxygenating it.

In la Mancha wetlands the works on soil and water have been focused on recovering the original basins closing old ponds of salt extraction, wells, or ditches created in the past to dry wetlands and to avoid the natural floods of those wetlands. On the other hand, works in Tierra de Campos include the removal of obstacles such as mounds created to avoid that flood.