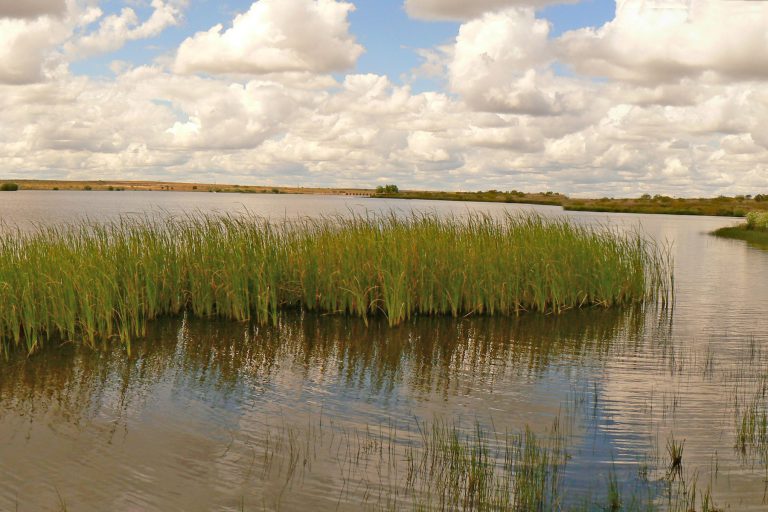 we work in ponds and temporary wetlands

Dehesas are one of the most biologically rich environments in Europe. The traditional livestock use allows the maintenance of a diversity of environments where the typical species of holm oak or cork oak trees are mixed with others associated with the Mediterranean scrub or grasslands. Within these dehesas there are temporary Mediterranean ponds, wetlands created for livestock uses where rainwater and water from streams accumulate. We have worked on the conservation and restoration of nine ponds of this type located on our 234-hectare “El Baldío” estate. The aim of this project was not only to improve the conservation status of the ponds, but also to generate practical guidelines for other owners. So we developed actions to regenerate the vegetation on the banks (mixing herbaceous and woody plants) and to recover the aquatic vegetation that helps to maintain the quality of the water and serves as a habitat for different species. Similarly, areas of partial exclusion of livestock were created to maintain water quality throughout the year. All of these measures benefited not only livestock but also aquatic species such as newts (Triturus marmoratus), mediterranean pond turtles (Mauremys leprosa), and water rats, and others that use the ponds, such as the endangered black stork.

The next step was to develop habitat improvements in a larger wetland such as the Talavan Reservoir. This wetland has been declared a Special Protection Area for Birds (SPA), acting as a meeting point or ecotone between two important ecosystems: the holm oak woodlands and the steppe plain. The reservoir serves as a feeding and resting area not only for waterfowl, steppe birds and birds of prey, but also for amphibians, reptiles and mammals. One of the greatest spectacles of this reservoir is the arrival in autumn of thousands of cranes, which use this reservoir as a roosting area. The main problem with this reservoir was the absence of vegetation on its banks that would serve as a refuge for the fauna and protect the wetland itself from silting up. To recover this space we developed a project that included the planting of 14 species of native trees and shrubs. In addition, we built floating nests for water birds such as the Little Plover and stilts, and nest boxes for the Lesser Kestrel, an endangered bird of prey typical of steppe environments. In order to promote and organise public use, a parking area was set up near one of the bird observatories and numerous environmental education activities were carried out with the schoolchildren in the area