We work to stop the decline of populations of aquatic warbler (Acrocephalus paludicola), the most threatened passerine in Europe, through actions to restore the habitat of migratory passage pre and post-nuptial. 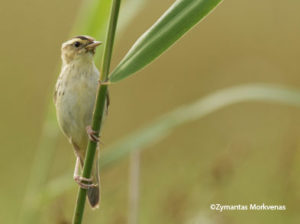 Since 2017 and thanks to the support of the LIFE Program we have promoted our efforts to protect this specie and its habitats in 12 municipalities in three Spanish regions (Castilla-La Mancha, Castilla y León and Comunidad Valenciana), all of them included in the Natura 2000 network.

With a priority focus on hydrological restoration and management of marsh, we try to guarantee an adequate habitat for the aquatic warbler, which finds in these lagoons one of its only enclaves as a stopover site during its annual migrations and with the main objective of halting the decline of their populations, currently in clear state of regression. Some of the actions of this LIFE Project include vegetation management through grazing, or periodic mowing with an amphibious machine that works both on land and in water.

With the support of: