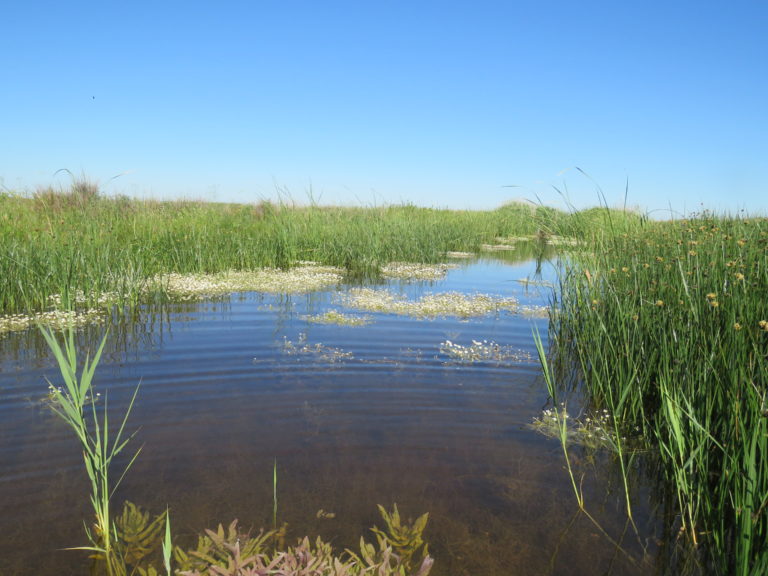 Until the middle of the 20th century, in Tierra de Campos there was one of the most important wetlands in Spain, the Laguna de la Nava, or Mar de Campos, a large steppe lagoon with a surface area of more than 2,200 ha, located in Palencia (Castilla y León). This lagoon was drained converting the area into agricultural land. In 1990 we started a recovery project and currently around 400 hectares of the original wetland have been restored.

Our first project was born linked to the La Nava wetland, and involved flooding the first 60 hectares of this lagoon after 50 years of drying out. At present, the water occupies about 300 ha. We have also worked on the restoration of the Boada and Pedraza lagoons where, thanks to the purchase and lease of agricultural land, the creation of land stewardship agreements, water management, the removal of dry vegetation by mowing, stripping and grazing, we have managed to restore 70 and 100 ha of water surface, respectively.

As a complement to these actions, in 2006 we started to work on the wetlands associated with the Canal de Castilla, one of the most emblematic and ambitious hydraulic works carried out in Spain, built in the 18th and 19th centuries to connect the Castilian plateau with the Cantabrian Sea ports. More than 70 small and medium-sized wetlands are developed on its banks, 33 of which are recognised as being of special importance for conservation. This is especially significant in a region like Tierra de Campos, with an arid and steppe-like landscape. Our achievements include reforestation, mowing and removal of dead marsh vegetation, and in some cases improving flood levels, in 34 wetlands associated with the Canal.

Every year we carry out waterfowl censuses, training courses, educational activities, scientific studies, and we also facilitate public use through routes, signposting, and bird observatories installed in the lagoons.

The results of these efforts have been spectacular, not only because the restored wetlands at Tierra de Campos now host, especially in winter, tens of thousands of geese, cranes and other water birds, but also because they are important for rural development in small villages, where more than 20,000 people per year come, many of them visit the Museum that we build and manage at Boada de Campos. For all these reasons, we have a long-term commitment to the Tierra de Campos wetlands.